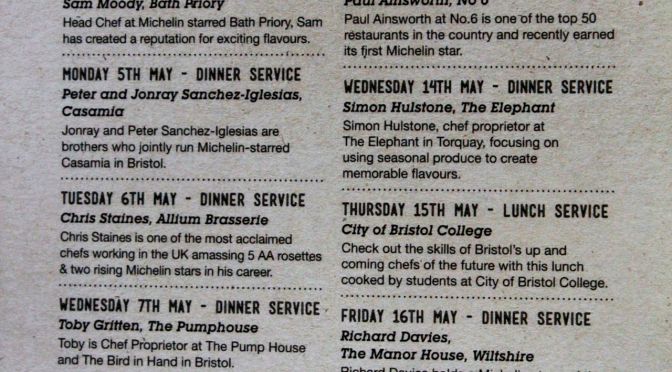 With March well underway and a few hot days under our belts (we know – most people wouldn’t consider 12ºC hot, but we’re optimists in Bristol) we reckon it’s high time we started putting winter behind us and looking forward to a great summer of foodie frolics in Bristol and beyond!

Kicking off the summer in style is Eat Drink Bristol Fashion, which runs from May 1st to May 18th 2014. Situated in Queen Square in central Bristol, Eat Drink is a huge pop-up event bringing together the best in the South West’s food and drink. Housed in the massive “teepee village” (yes, teepees!) will be fine dining and street food from some of the best chefs in the region. The event was launched last night at Yurt Lush (appropriately enough, a large Mongolian tent!).

The festival is the brainchild of Josh Eggleton and Luke Hasell, who after collaborating on a pop-up restaurant decided to expand this idea and in 2012 the first Eat Drink Bristol Fashion showcased some of the best chefs in Bristol. In 2013 this grew further to nab the best chefs from Bristol, Bath and the surrounding areas and it’s back for a third year with a massive celebration of the South West. The chefs this year have a total of nine Michelin stars between them – what an amazingly talented region!

Josh, Luke and everyone involved in the festival are hugely passionate about the sustainability, ethics and traceability of the produce they use . This really came across in their speeches about the event and what it means to them, they feel that the more people that know exactly where their food comes from the better and we totally agree! We produce incredible ingredients down in the South West – the mild climate, coastline and rolling fields mean we make some of the best produce in the country. It’s really inspiring to see a celebration of this with input from the growers and the chefs – from field to exquisitely prepared plate.

At 28, Josh – head chef at the Michelin-starred Pony and Trap – has already achieved more than most chefs can dream of (and he’s a really nice bloke – not fair is it?!). He lives and breathes food, and his passion really shines through. He serves what he likes to call “modern British” cuisine at his restaurant, which gives him a lot of license for creativity since us Brits have always been magpies when it comes to other cultures’ foods! We spoke to him about food and nutrition education – he’s so keen to get better education in schools about cooking; not just learning about nutritional values and how to make flapjacks but thinking about the whole growing process as well as how to make simple, cheap meals which make the best use of ingredients, something that we really try to get across on Fats and Bird. Hopefully with inspiring chefs and farmers taking centre stage this summer, the people of Bristol will get as excited as we are about the wonderful world of food.

Luke is a farmer and a firm believer that organic farming is the future of food production. He gave a great (and long!) speech about how everyone needs to reconnect with the food they produce – we were left feeling inspired to go out and start growing our own veg and maybe buy a cow, if only it was that easy!

The event itself is an exciting few weeks packed with fine dining events hosted by some really wonderful chefs, alongside which is Josh Eggleton’s signature “British Tapas” menu, providing casual diners with food from noon until 10pm every day – all with a backdrop of completely free live music. The fine dining begins on Friday 2nd May with a unique collaboration between Valentine Warner and Nathan Outlaw and is wrapped up by Jack Stein on Saturday the 17th, on the way taking in such stellar chefs as Sam Moody (Bath Priory), Peter and Jonray Sanchez-Inglesias (Bristol’s Casamia), Romy Gill (chef-owner of Romy’s Kitchen, and blazing a trail for women across the country!) and Paul Ainsworth (No 6, Padstow). See the full program below!

We couldn’t be more excited about Eat Drink Bristol Fashion, and we reckon this summer is going to be absolutely amazing! Tickets go on sale any minute now – we’re checking the website and will let twitter know when it’s up.

We left the launch feeling totally inspired about the Bristol food scene, and desperate to get out there and try more of the amazing local produce that we know is out there. Keep an eye out on our blog for more previews of what’s to come in Bristol this summer!

This weekend it was the Harbour Festival in Bristol which is always worth attending if you’re in the area. It’s a riot of sound, colour, smells and people absolutely everywhere! Spread across several key sites alongside the water in the city there is live music, dance performances, street performers, local producers selling their wares, amazing freshly cooked food, local beer and cider tents… sounds pretty good right?

We headed down at about midday on Sunday and were both starving so we got stuck into some burgers fairly quickly, I went for a classic local beef burger and Fats chose a venison burger. They were delicious but gone in no time so after a quick wander we picked up a fresh strawberry and cream tart to share.

One thing I was very excited to see was the giant Clipper tea Magical Teapot and it did not disappoint! There were girls in cute teaspoon embroidered dresses handing out free tea samples of their Big Bright tea and a wheel where you could spin for a chance to win a Clipper mug and guess what?

We tried the Big Bright tea that night and it was delicious, it’s perfect for summer when we don’t fancy black tea as much because it is light but still with great depth of flavour. We’re already big fans of Clipper (their tea and their ethics) so will definitely be purchasing this when the samples run out.

Flushed with victory we wandered round to the Cascade Steps and spied a new restaurant, The Stable, which we are now desperate to try – it’s right on the harbourside and serves pizza, pies and cider which sounds absolutely perfect for a summer evening. Apparently they have over 60 different types of cider available! Look out for a review coming up very soon I hope. Having just been on their under-construction website it turns out they have an all you can eat toast bar from 8-11 which might just be the most genius idea we’ve ever heard.

Bristol has to be one of the best cities to live in during the summer, we both came here initially as students and we never realised what we were missing during the break – there is a festival of some kind on almost every weekend, but the Harbour Festival is one of the biggest and best. Can’t wait until next year!

The things this Londoner loves...